A man was filmed on a New York City Subway train yelling in the face of an elderly woman who said she wished he would be fined for refusing to wear a mask.

In the video, posted to Instagram early Monday morning, the unidentified man can be seen smiling and standing over the woman as she tells him: ‘I wish he police would give you a $50 fine.’

‘Please get away from me sir,’ the woman says, before her harasser begins chanting ‘1776’ while pumping his fist in the air. 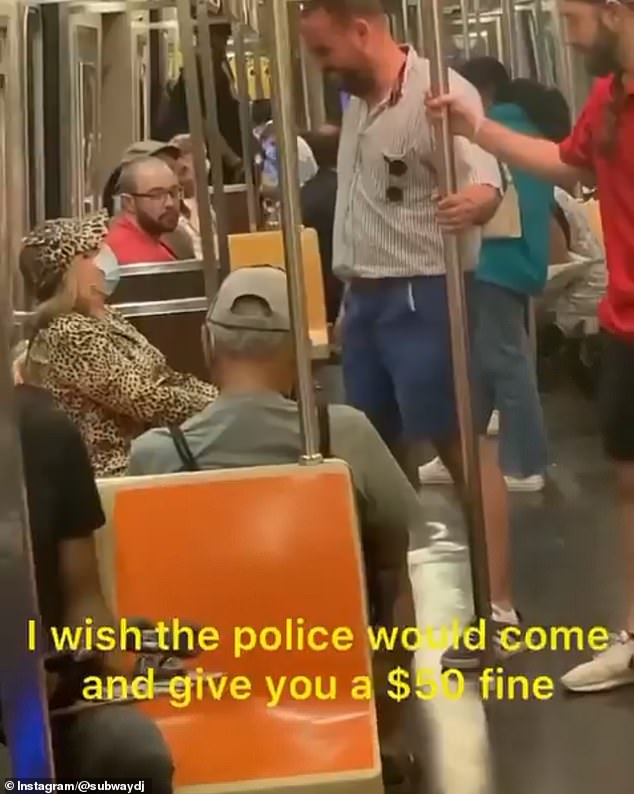 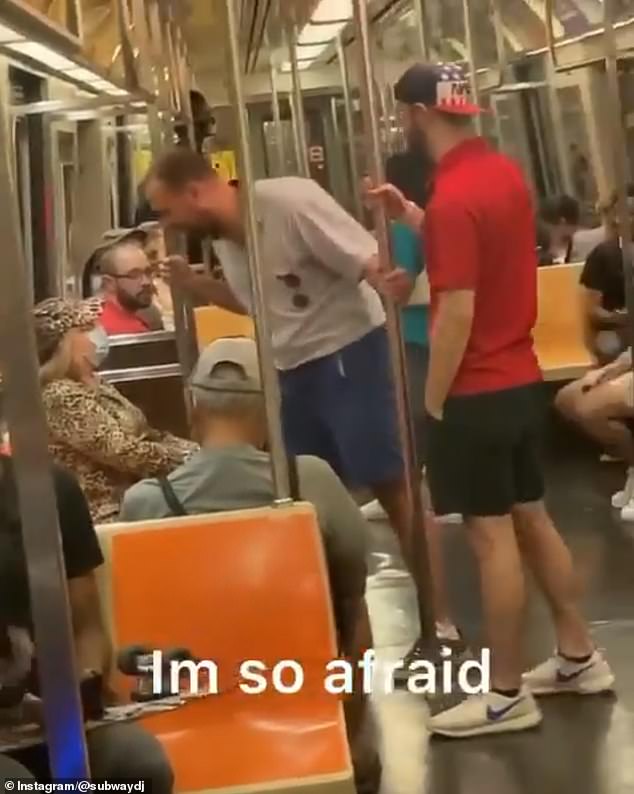 The man, in a tiny voice, sarcastically tells her how afraid he is of the woman’s threat 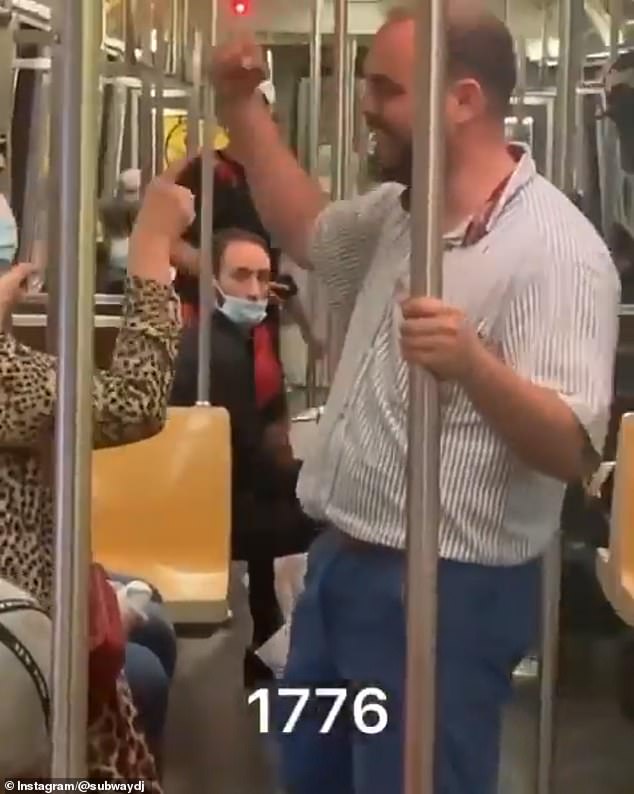 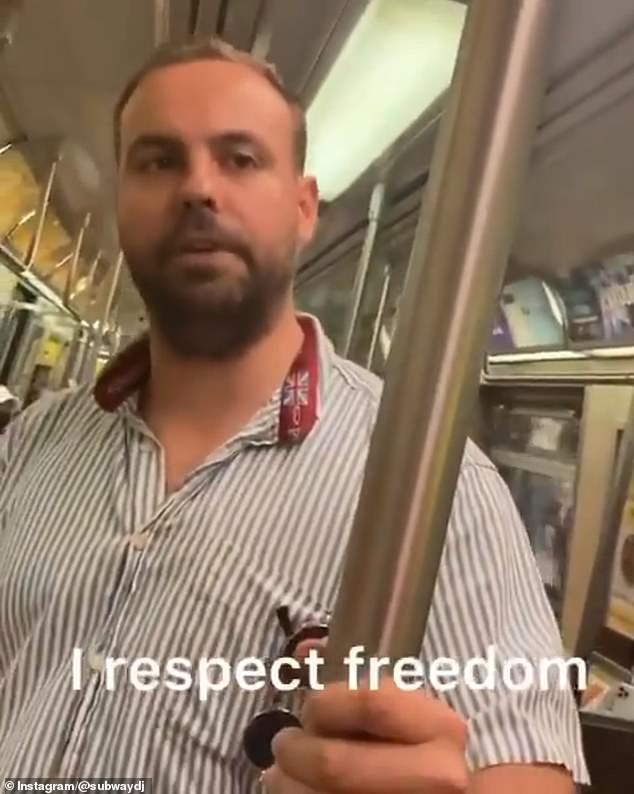 The woman tells bystanders on the train that the man had been disrespecting her, to which he replies: ‘I respect freedom’ 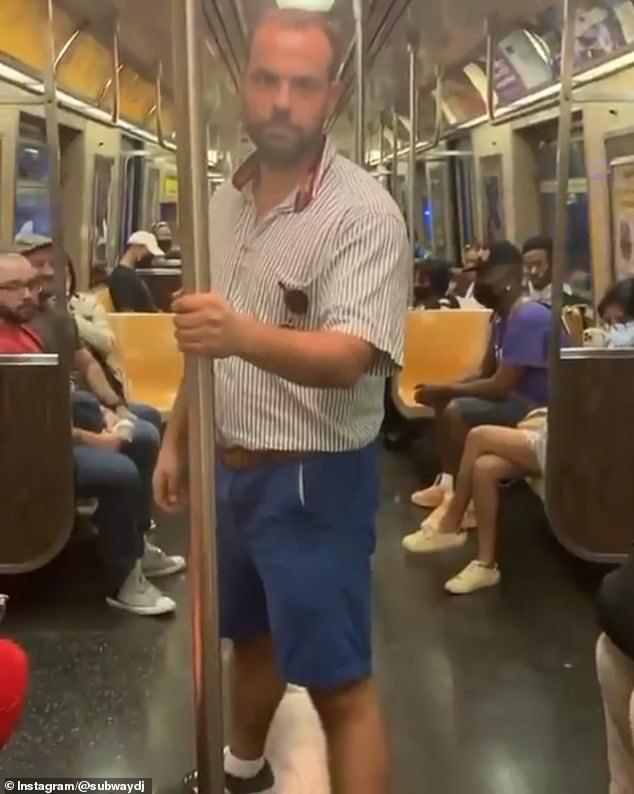 The video ends with the man glowering at the camera

Then, the woman stands up, points at him, and says, ‘respect your elders,’ to which he tells her to sit down, and says, ‘I respect freedom.’

The woman then reiterates her point to bystanders that the stranger has been disrespecting her.

‘You know what I respect? I respect freedom. What do you respect?’ he asks, turning his attention to the man filming the encounter, who has since stepped closer to the pair.

The video ends with the man glowering at the camera.

User @Subway_DJ, who initially posted the video to Twitter said the incident took place on the Q train in the Upper East Side of Manhattan. 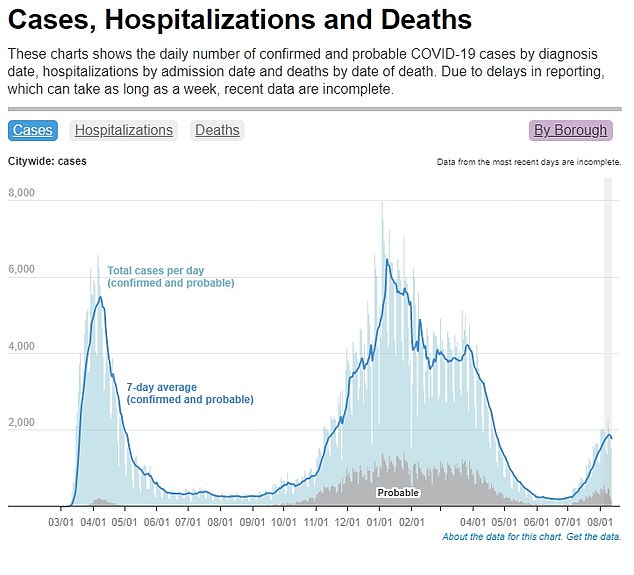 He said despite the man’s behavior nobody intervened.

The encounter comes as the Metropolitan Transportation Authority still mandates that riders wear masks in indoor train stations and platforms aboard trains, buses and trams.

Riders who refuse to wear a mask risk a $50 fine.  New York state has lifted mask mandates in all other locations bar healthcare settings, although private businesses can still choose to ask customers to mask-up on their premises.

The incident also came as the Indian Delta variant has driven coronavirus infections up nationwide and in New York City as well, with 1,424 confirmed new cases recorded over the past week compared to a low of 195 cases recorded on June 20, according to the city’s Department of Health.

Many on social media called out the man’s apparent hypocrisy in telling the riders of his respect for freedom while seemingly ignoring the woman’s autonomy.

Some noted that throughout the encounter, nobody on the train seemed to take action

‘Weird. It’s like he doesn’t know what freedom actually means.’

‘He said he respects freedom…. Just not hers,’ wrote a user on Instagram, where video of the encounter was also shared and had been viewed more than 730,000 times.

‘I can’t wait for his apology video,’ joked another.

Some, however, noted that throughout the encounter, nobody on the train seemed to take action.

‘And not one person did anything,’ replied an Instagram user.

Some social media users claim to have identified the man. DailyMail.com has attempted to reach out to him for a comment.