A man has been charged for landing a helicopter in a busy parking lot in order to fulfill a Dairy Queen pit stop.

The Royal Canadian Mounted Police (RCMP) issued a news release detailing the incident, which reportedly took place on July 31, 2021, in the Town of Tisdale.

HELICOPTER PILOT STOPS FOR LUNCH IN UK WHILE WAITING IN CHOPPER, UPSETS INSTAGRAM

The 34-year-old pilot’s name was not revealed, but the RCMP reports he is from Leroy, a town in the province of Saskatchewan.

He reportedly landed a red helicopter “in high traffic parking lot on 101st Street in Tisdale, SK” at around 5 p.m. CST, according to the release. The RCMP was alerted to the helicopter’s presence after receiving a complaint.

“When it landed, the helicopter blew up dust and debris through the area, which includes schools, an aquatic centre and more,” the news released stated. 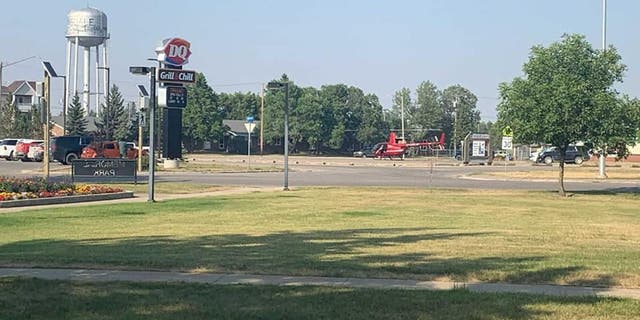 The pilot reportedly dropped off a passenger who picked up an ice cream cake, according to the RCMP’s investigation.

LOST ELK HUNTER IN COLORADO RESCUED AFTER HELICOPTER CREW, ON IMPULSE, SEARCHES AREA HE WASN’T THOUGHT TO BE

While the pilot was licensed, he was charged on Wednesday, Aug. 4 for illegally landing the helicopter in an undesignated zone for a non-emergency purpose.

His charge includes “one count of dangerous operation of an aircraft,” according to Section 320.13(1)(a) of Canada’s Criminal Code, the RCMP reports.

The man is scheduled to appear at the Saskatchewan Provincial Court in Melfort on Tuesday, Sept. 7, 2021.

Representatives for the RCMP did not immediately respond to Fox News’ request for comment.

This isn’t the first food-related helicopter incident to happen in 2021, either. A pilot in the U.K. was highly criticized by social media users in March for making an 80-mile roundtrip to pick up a sandwich –which led authorities to investigate whether the trip went against the country’s travel guidelines that urged residents to avoid nonessential travel, according to BBC News.